Our summer artist residency is located in the historic Bingham Cottages at Hog Island. 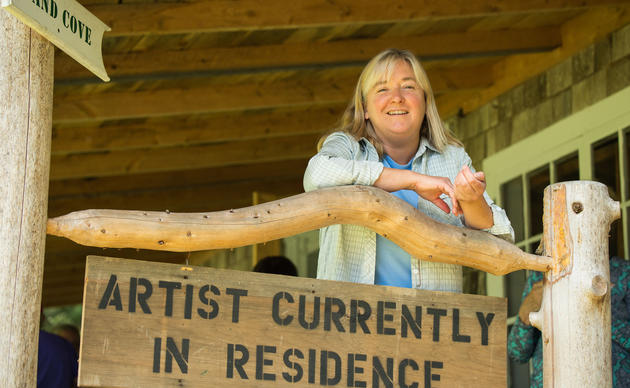 I met the other campers at Portland Jetport.  Spotting scopes and luggage are packed into the van.  We pull out at 12:30 and go to a nearby wildlife reserve.  In the first five minutes we've spotted a male American Redstart, Broad Winged Hawk, Turkey Vulture and a Green Heron stalking around in a small pond, among some other species.

The first half of camp was spent on Borestone.  We stayed in log cabins that were built in the 1800's with timbers from the mountain.  There was a lake with no fish, just frogs and other amphibians, It was a beautiful view, and on the night of the second day, the fog lifted up over the water, catching the light from the sunset; it was as if the northern lights had fallen from the sky.

On Tuesday, we hiked to the summit of Borestone.  On the way up, we found two Red Efts and a Garter Snake and a multitude of birds.  When we were on the summit, we spotted two loons in the lake down below.  There were a few small islands in the lake, one of which was inhabited by a pair of Bald Eagles, who had a nest in the tallest pine.  As we watched, a Broad Winged Hawk, and Peregrine Falcon flew over the valley below.

On the way down, we came across two Hermit Thrushes standing in a clearing.  We got some great photos of them, before they disappeared into the undergrowth.  That was also when we saw our first Boreal Chickadee.

The great thing about being on a mountain is that you are eye level with birds that are in the canopy of the trees rooted farther down the mountain.

On the third day, we went on an optional hike (it was at 4:30 in the morning) in a last ditch effort to find a Ruffed Grouse on Borestone.  We were unsuccessful, but we did get to see one with seven little cheepers (babies) later in the day.

Later, on the trip from Borestone to Hog Island, we stopped at several different birding locations - the first of which is where we saw the Ruffed Grouse.  We also got some new warbler species.

After arriving, we saw the first Common Eiders on the boat ride to Hog Island, sunning themselves on a rock.

After breakfast on the Thursday, we boated out to Egg Rock.  We saw Common Terns, Arctic Terns and Roseate Terns; Atlantic Puffins and Razorbills; a few gull species, osprey, and eiders.  Every so often, a porpoise would pop up over the waves, before sliding back under.  Seals crowded the smaller islands, flopping around awkwardly on land.

Every day, there was a 'Mystery of the day' with a few questions you could answer.  You didn't have to, but the person who answered the most questions right, won a prize at the end of camp.

We went on a Merlin nest hunt at Hog Island.  We came up empty, but we did see the merlin!

The instructors and campers alike were some of the nicest people one could find anywhere.  All were ready to help out whenever possible.  It was a great experience and given the opportunity, I would do it again!