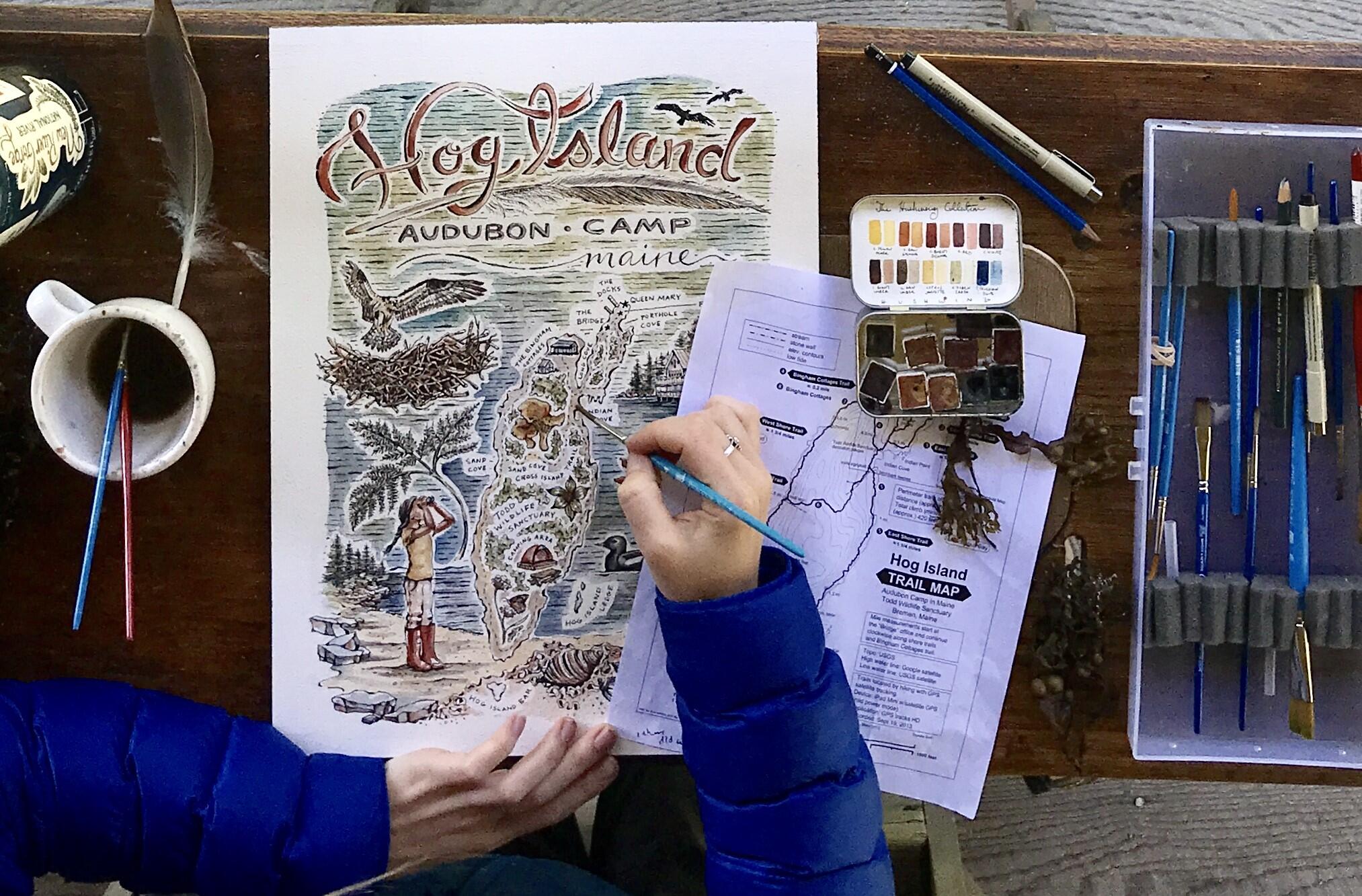 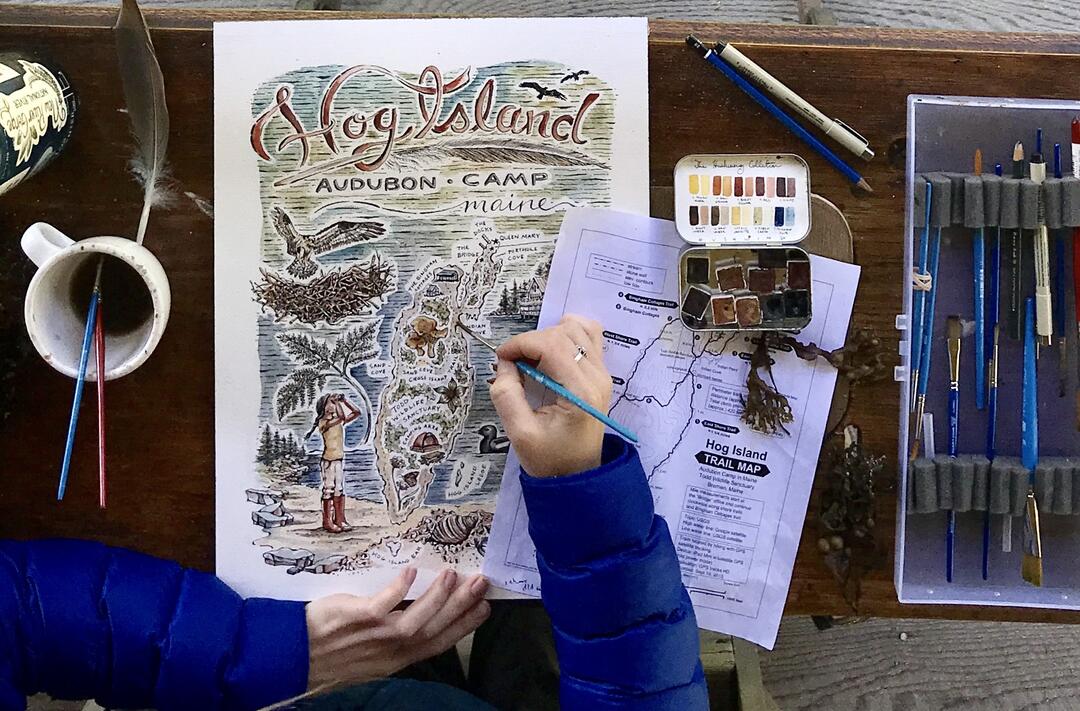 Nestled along the Gulf of Maine and Muscongus Bay, lies a forested island in a small Maine fishing town. Hog Island is rich in history and has also been instrumental in the environmental education movement in the US. Since 1936, residential sessions at Hog Island Audubon Camp have been led by some of the most respected naturalists and environmental educators in the nation, inspiring scores of scientists, school and university educators, and conservation leaders.

In 2014, Audubon added artists to that list. The Artist-in-Residence (AiR) program brings artists across disciplines and subject matter from all over the world to enjoy hands-on nature discovery in a creative, rustic retreat setting.

Over the last six years, nearly 20 artists have joined the Hog Island family. I had the honor of asking these talented folks about their experiences on the Island.

As bird nerds, it is no surprise that our conversations began with talks of favorite birds on and off the Island. Tom Schaefer, author of Nature’s People: The Hog Island Story from Mabel Loomis Todd to Audubon and 2014 AiR, first shared how cool it was to write chapters of a book about the Todd Bingham family from Millicent’s very own desk . While Mr. Schaefer participated in AiR in 2014, his first visit to the Island was in 1981. He explained, “As far as birds are concerned, it’s hard not to be impressed with the Atlantic Puffins, but I’d have to say the Osprey I scared up while hiking the perimeter of the Island was my favorite. In 1981, Osprey were still making their comeback. Pretty exciting bird for my life list.”

Other favorite Hog Island birds included Atlantic Puffin (of course), Roseate and Arctic Terns, Winter Wren, Bald Eagle, Hermit Thrush, Black-throated Green Warbler, and Common Loon. 2019 AiR and watercolor painter Rosalie Haizlett explained, “My favorite bird on the island was the Common Loon, because I could hear its wails so clearly from my little cabin in the evenings. The sound was simultaneously melancholy and calming and while at first it gave me an eerie feeling, I soon grew accustomed to it and enjoyed it.”

2015 AiR, program coordinator, and printmaker, Sherrie York said, “That’s a toughie, because I like them all! Each species has a unique role to play in the environment, as well as its own personality. As an artist, I am particularly drawn to birds with a strong graphic character. I often joke that Harlequin Ducks, with their bold and bright plumage, must have evolved just to inspire printmakers.”

Ms. York went on to share, “As a group, the birds that inspire me most are those that have some sort of direct relationship with water: seabirds, shorebirds, and waterfowl. I grew up and lived most of my life in Colorado, in the arid interior of the United States. A couple of years ago I moved to Maine, and now live about 20 minutes from Hog Island. Both places are strongly tied to water but the relationships are very different. Whatever our human relationships to water might be, water birds can connect us and help us understand the challenges and needs of our particular region.”

As our conversation shifted to most surprising moments on Hog Island, many artists spoke of an elevated sense of place. Mr. Schaefer elaborated, “Hog Island is three-hundred-plus undeveloped acres in one of the most beautiful summer destinations on the planet. Mecca for hikers, climbers, birders, sailors, artists—vacationers of many different feathers. Hog Island has been an integral part of my life since first footfall in 1981.”

“That cabin, that island, and the world that envelops it gave me the room that I needed to think about some of the themes I’m obsessed with: birds, how we should think about them, what they mean in our lives, and what we mean in theirs,” explained 2018 AiR and author Mark Hedden.

2015 AiR and playwright Rebecca Gilman shared, “One night, I was startled awake by the weirdest, loudest sound. I lay there wondering what was going on. Finally, I went outside and stood in the pitch black. It took me a while, but I eventually figured out there were seals out in the water, barking. I grew up in Alabama and I live in Wisconsin, so that was a first for me.”

Ms. Haizlett explained, “While I was, of course, familiar with the Artist-in-Residence program, I didn't expect that nature journaling and sketching would be deemed such an important tool for learning [throughout other camp sessions]. I would often see students of all ages sketching in the woods or on the beach, and it made my heart happy to see people connecting with the natural world through the arts, which is how I also learn most effectively. I was invited to teach several nature illustration workshops while I was there, and those art and nature parties where some of my favorite experiences at Hog Island.”

Oil painter and 2019 AiR Ralph Grady James shared his fondest memories: “First, I loved hearing the loons calling on the water while sitting on the cabin porch as the sun set. I also loved seeing the lobster boats tending their traps. It is not often in these days having that much peace and quiet away from others especially surrounded by the beauty in that place.”

Ms. Haizlett added that her favorite memory was “eating my breakfast on my sandy little cabin beach every morning while watching the harbor seals catch their own breakfast.”

Ms. York, as the coordinator of the program, spoke with a motherly tone. “My own best memories are about watching the delight that campers and Artists-in-Residence experience when they try something new or discover something unexpected—either about nature or about themselves.”

Paper artist and 2018 AiR Ingrid Erickson shared, “One of my fondest memories of Hog Island is of sitting on the porch in the evening, as the sky turned inky and filled with stars after my last solo walk on the beach. The night sky over Hog Island on a clear night is probably the least light polluted view of the night sky I’ve had in some time. Being an Artist-in-Residence was a wonderful combination of solo contemplation and exploration of nature, combined with a wonderful community of Audubon Staff, campers, and families.”

Mr. Boardman echoed that theme. “I loved the combination of isolation and comradery; spending the day solo-kayaking and exploring around the Island, then joining the bird banding session with the ornithology class to see warblers close-up.”

The juxtaposition of isolation and comradery was also met with thoughts of science and art. Are they truly on opposite ends of the spectrum?

Illustrator and 2021 AiR (all sessions were canceled in 2020 due to COVID-19, but each of the three artists are invited to complete their residency in 2021 instead) Madison Mayfield expanded on the question. “I started my journey as a scientific illustrator after I graduated with a degree in conservation biology. I soon realized that I could pursue art and continue to work adjacent to science without going into research or academia. I think art is an incredibly important tool that can be used to make science more accessible, but for some reason, science and art are considered completely separate entities. I'm motivated to change that perception. Being an artist does not mean you can't also be a scientist and vice versa.”

Mr. Boardman added, “The connection to the science going on both on the Island and as part of Project Puffin has focused my art on building that bridge between creativity and biology, using my work as a way to emotionally engage people with what’s going on in the natural world.”

Turning to the lasting impact of a place like Hog Island, I asked the artists how their time on the Island has influenced their craft.

Ms. Haizlett shared, “My time on Hog Island was a beautiful confirmation to me that I'm on the right path. I realized how special it was to be able to share conversations with so many engaged, creative minds at Hog Island.”

Mr. Hedden illuminated everyone’s sentiments in one gorgeous sentence, “You know a place like that doesn’t belong to you, but you also know it does.” 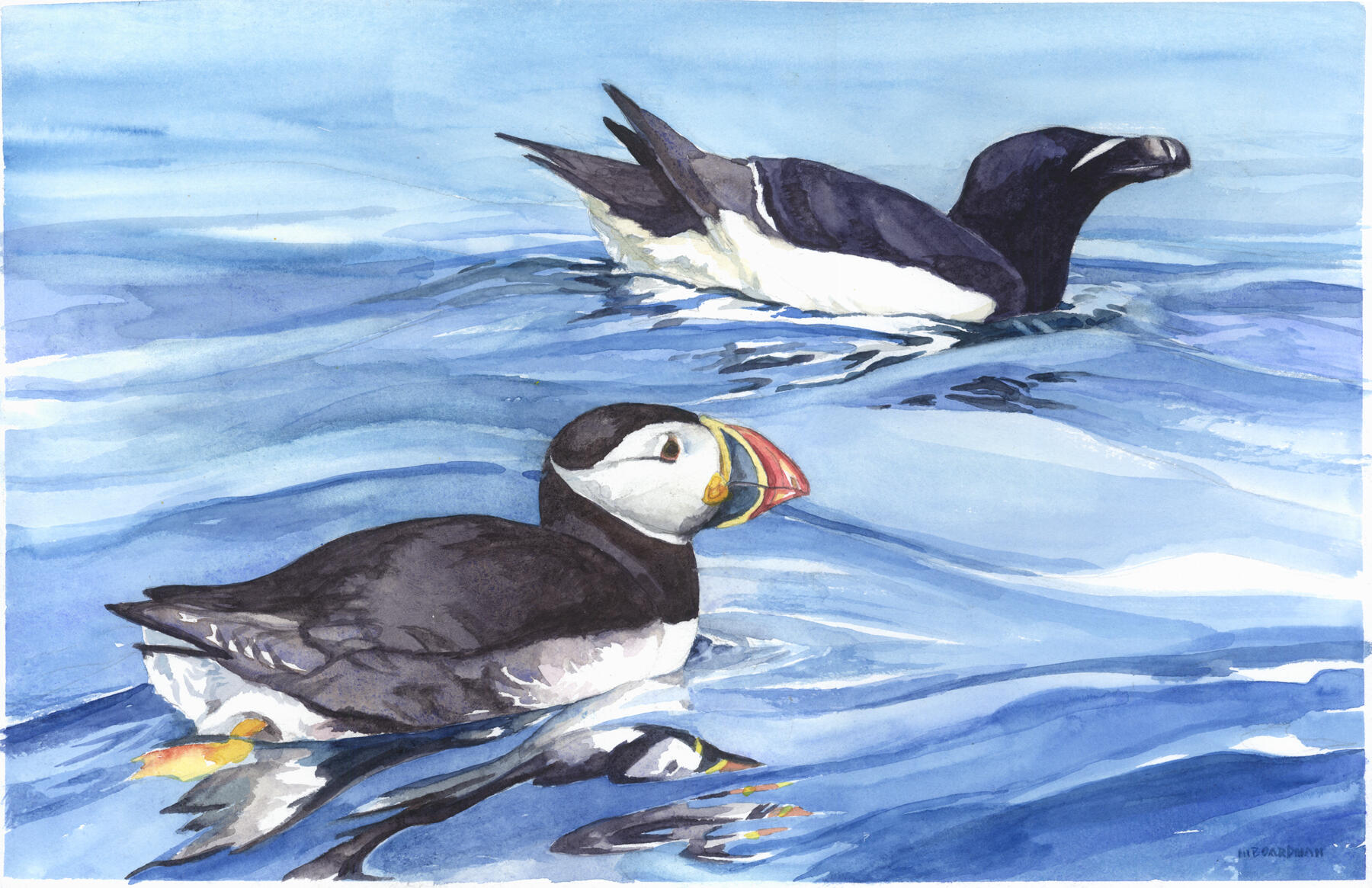 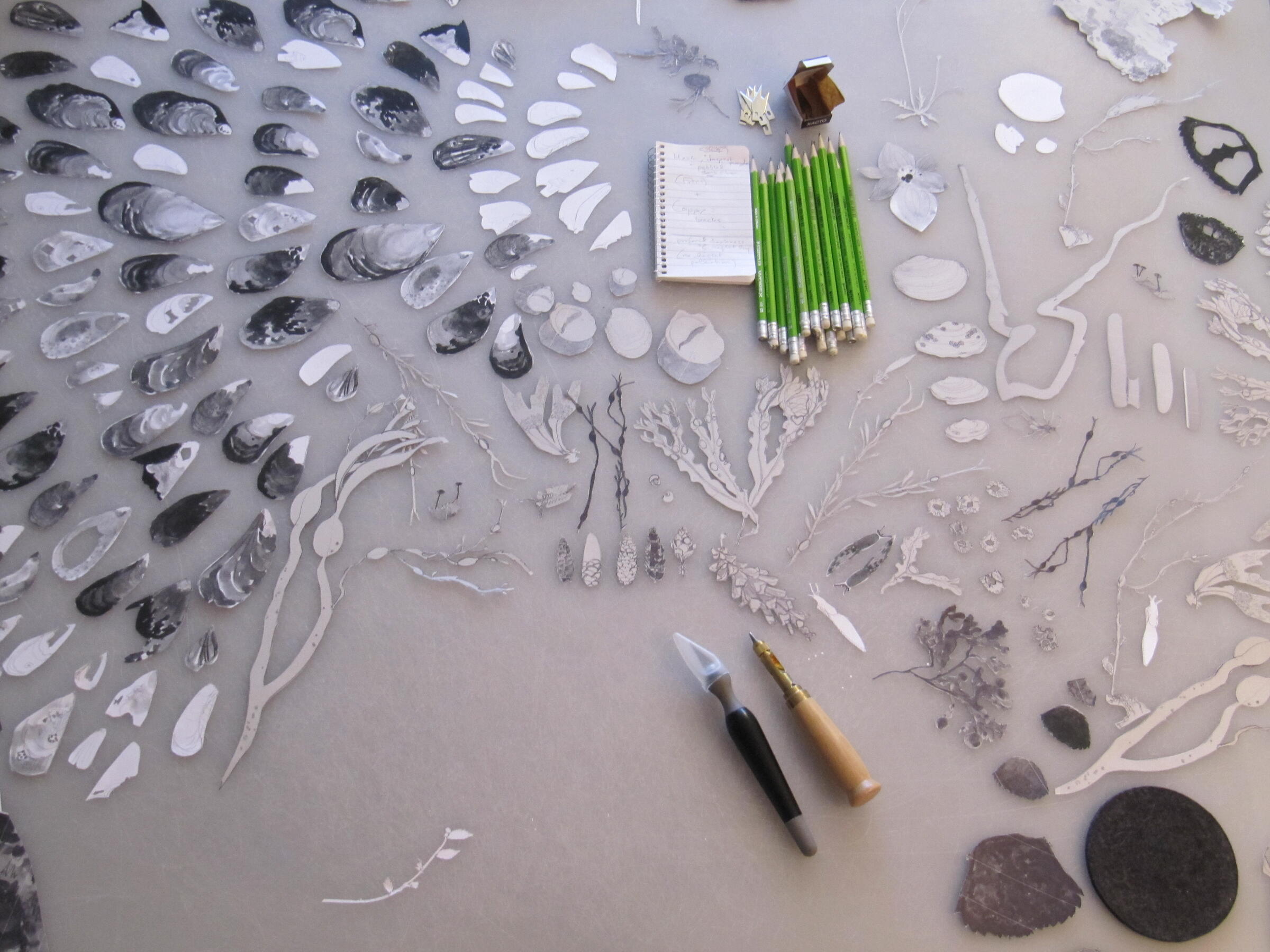 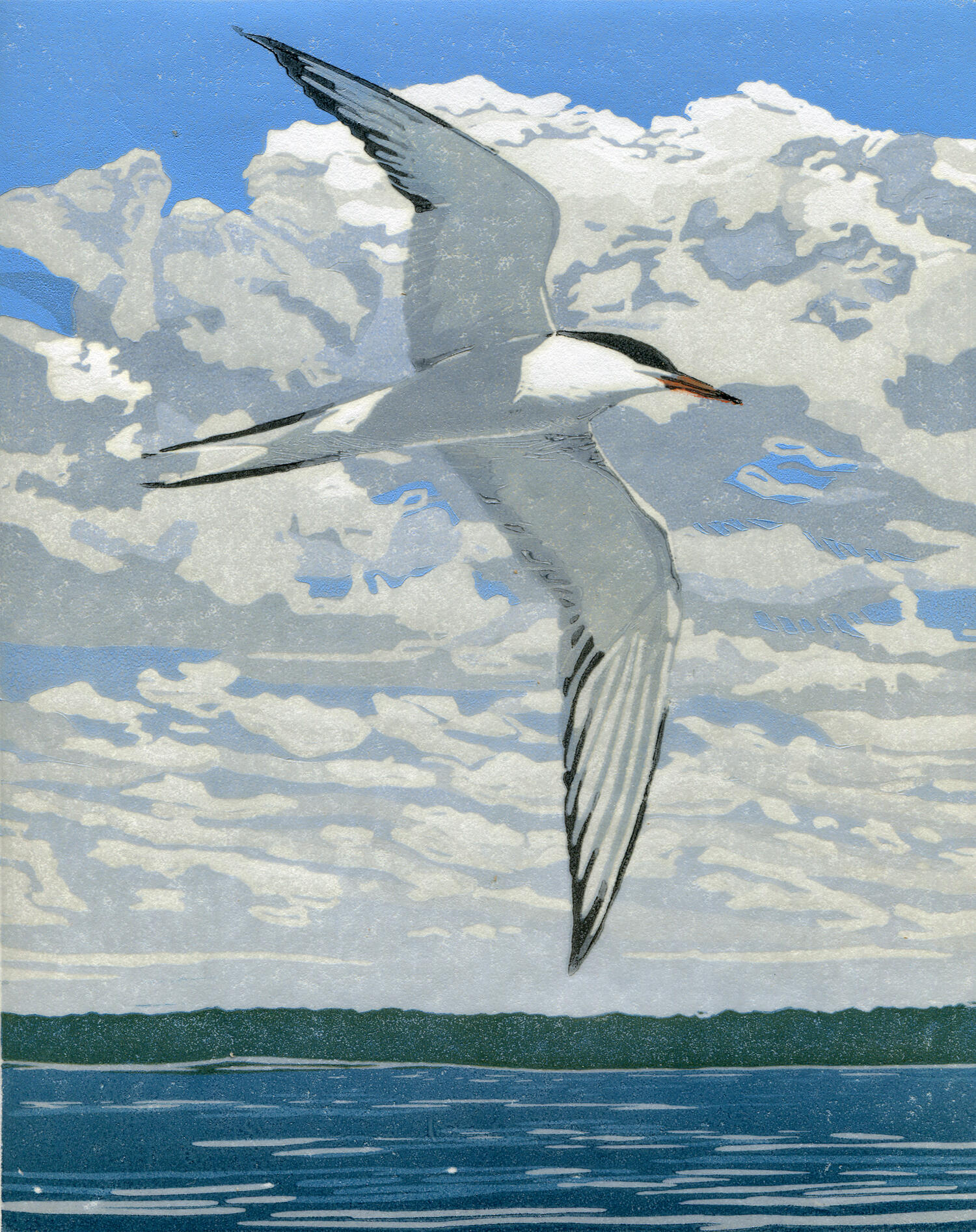 Ahead of the Storm by Sherrie York 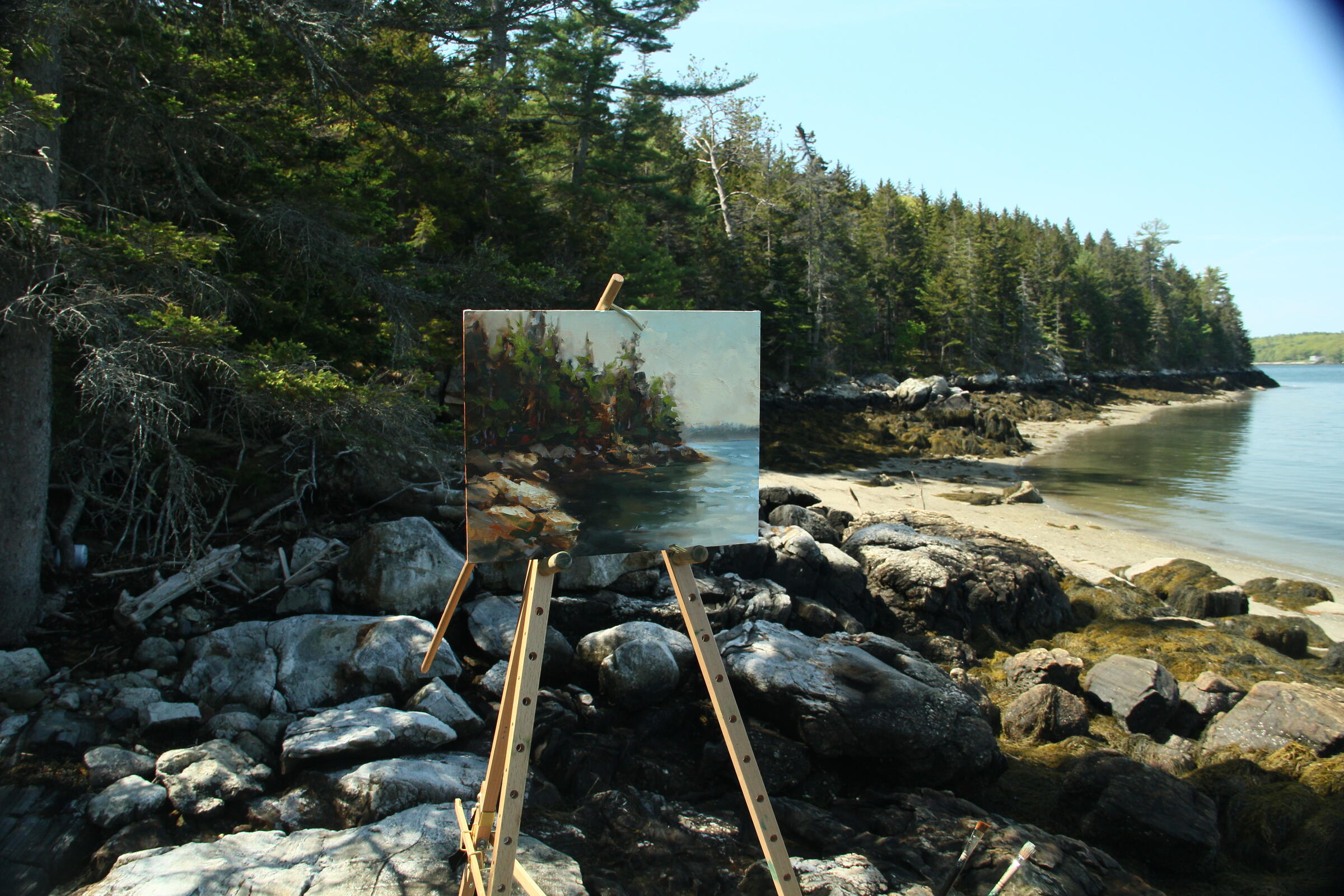 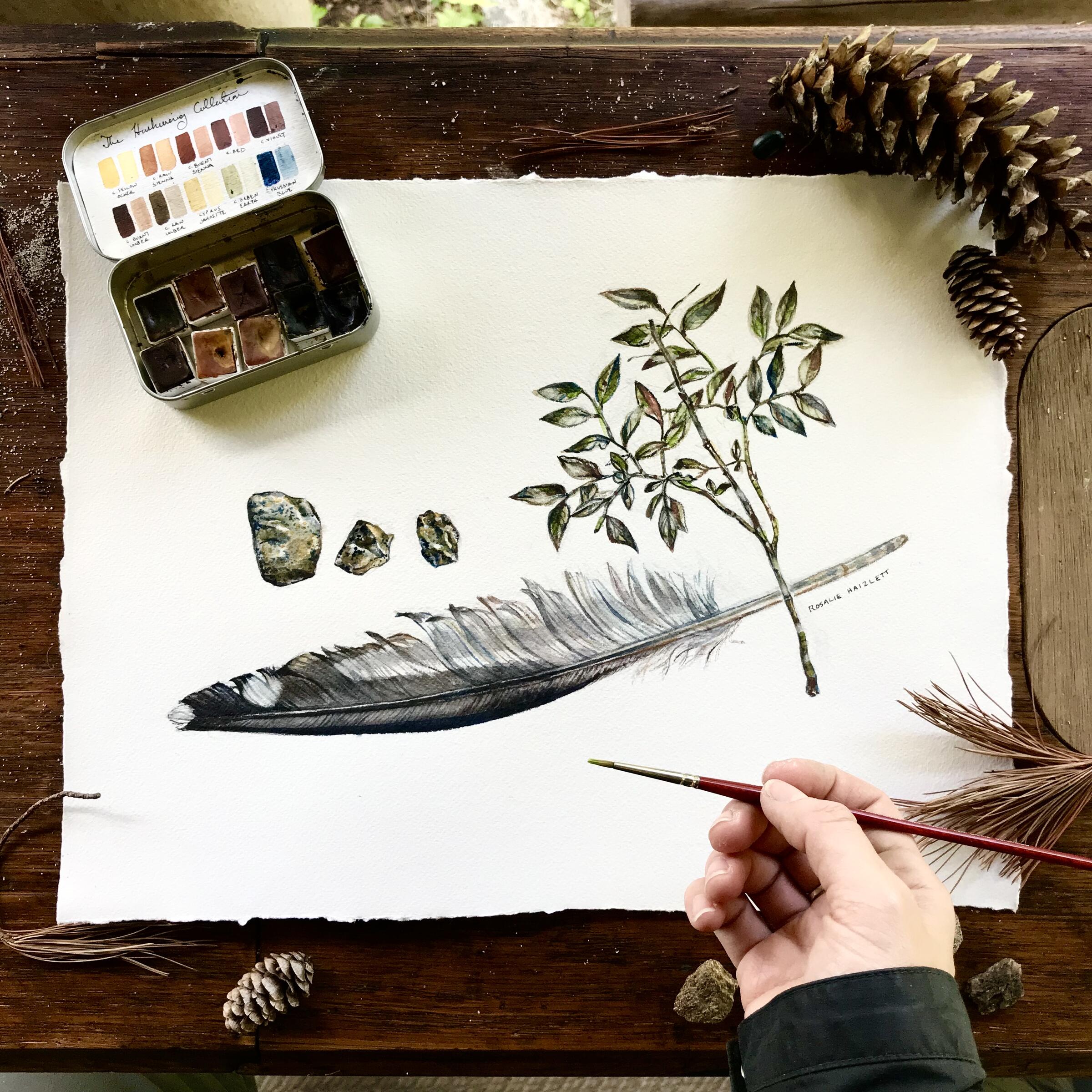